In Mexico, raspberry production has presented an average annual variation of +30.8% during 2011-2020, having the most important increase in 2015 with 83.5% with respect to 2011, while the maximum historical production was obtained in 2021.

The leading raspberry producing state in Mexico is Jalisco with 116,340 tonnes in 2021, or 70.2% of total production, followed by Michoacán (29,872 t) and Baja California (16,089 t), states that together produce 97.9% of domestic production. On the other hand, Jocotepec (Jalisco) is the main producing municipality with 44,650 tonnes, followed closely by Zapotlán el Grande (Jalisco) with 40,283 tonnes.

Although slight variations have been observed in recent years, the highest raspberry production tends to occur in the middle and end of the year, with the highest volumes in December and the lowest between July and September, a period in which production decreases significantly.

In Mexico, 82.6% of raspberry production is obtained in macro-tunnels, while 16.9% is in the open air, 0.5% in greenhouses and less than 0.1% in shade nets, with a clear dominance of protected agriculture production, generating 4,844 million pesos over the 1,888 obtained in the open air.

On the other hand, as for the type of production, 97.7% is conventional, leaving only 2.3% for organic, so there is a growth opportunity for growers who want to work under an organic production system. 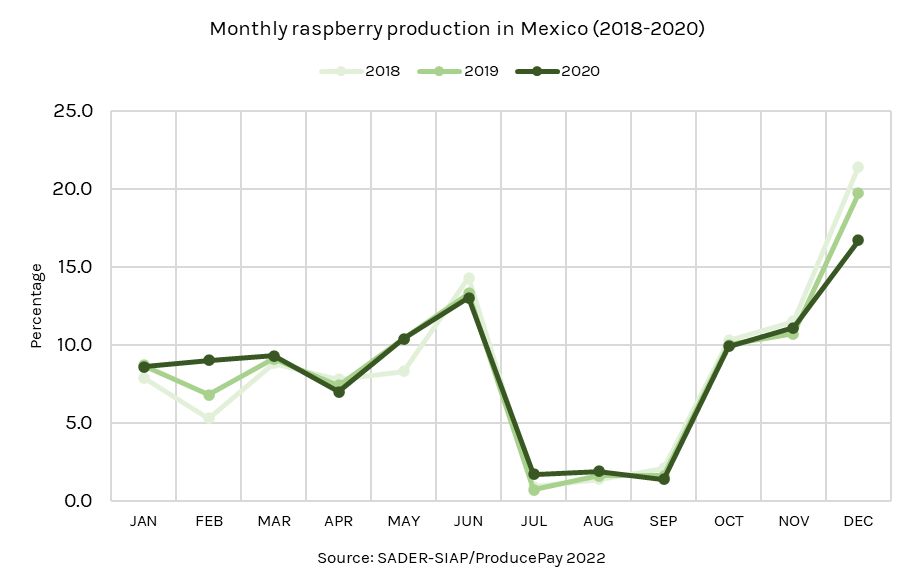 The seasonality of exports has remained constant over the last few years, with the high season in the months of November, December, March, and April, while the lowest volumes are shipped between June and September, a period during which it competes with production in the United States. 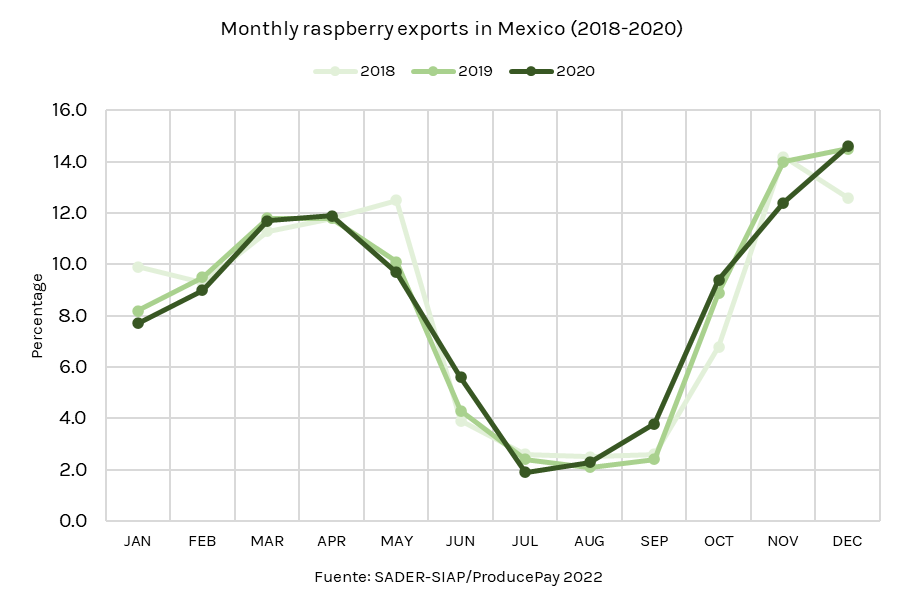 Raspberry production in Mexico has been growing steadily over the last decade, with the highest historical production in 2021 with 165,677 tonnes, 13.2% more than in 2020.

Raspberry exports have also grown considerably in recent years, shipping 107,462 tonnes in 2020 with a value of 1.105 billion dollars, with the United States as the main customer, where 92.0% of this product is shipped.
Mexico has great growth potential for raspberry cultivation, so new alternatives such as organic production, technification or expansion into new markets can be explored.