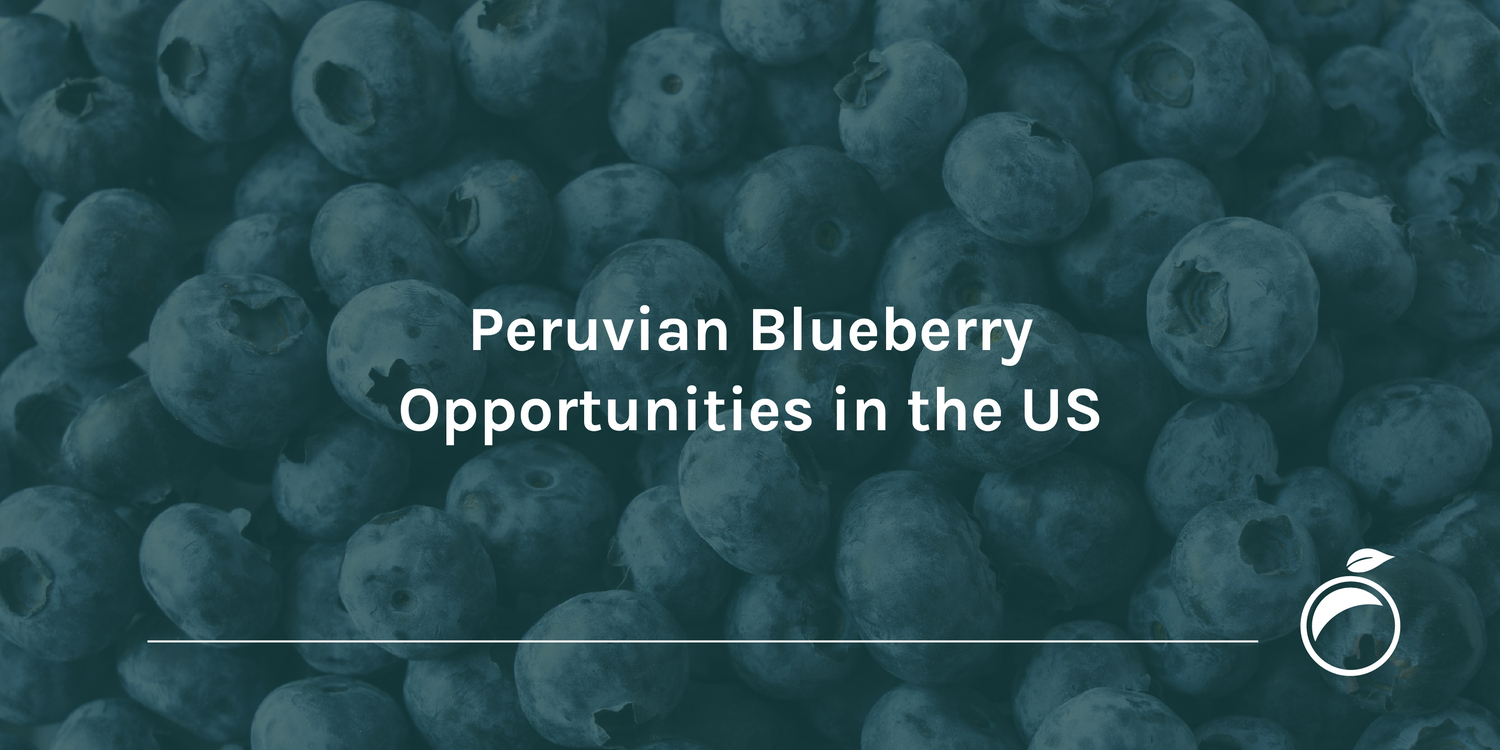 Peruvian Blueberry Opportunities in the US

Blueberry is currently one of the most important high-value crops worldwide, since it is an agricultural product that consumers in most developed countries are eager to consume, mainly due to its high antioxidant content, which means it is a nutraceutical food.

In 2020, global blueberry production reached 1,514,231 tons, representing its historical maximum, and surpassing the 2019 volume by 0.7%. That amount of production was obtained from 168,890 hectares, so the yield remained at 9.0 tons per hectare.

In this sense, Peru was the third largest blueberry producer, with 180,300 tons (the equivalent to 12.0% of the world total), only behind the United States and Canada, and followed by Chile, Poland, and Mexico.

Moreover, in that same year Peru consolidated its position as the world’s leading exporter of blueberries, with 162,174 tons shipped, that was, 26.2% of total world exports for this berry, production that reached various markets, although of course the United States was the main one. In addition, this volume represented a revenue for the country of 1,003 million dollars.

It is worth mentioning that Chile, the Netherlands, Canada, and the United States are the next largest exporters after Peru, with Chile being its greatest competitor in exports, accounting for 17.2% of exports.

However, it should be noted that it was in 2020 when Peru became the main supplier of blueberries to the U.S. market, year in which it surpassed Chile, whose imports also decreased in 2021, so that the difference with Mexico is minimal, although in the case of Peru in 2021 its figures differed significantly from those of both countries.

Despite this, in the following years the Peruvian blueberry industry should focus on consolidating its exports to the United States, because although the difference with Chile was 31,228 tons (quite considerable), the truth is that Mexico has been growing at a very good pace as well.

To understand the opportunities that the Peruvian blueberry industry has, in terms of the U.S. market, we must first review the seasonality of exports.

In the following graph we can see when the flow of blueberries from Peru to the United States occurred. We can observe how shipments were concentrated in the months of October, November, and December, with lower volumes in August, September, January, and February.

Then, in the following graph we add the main competitors, Chile and Mexico, as well as domestic production in the U.S. The first thing that can be observed is that Peru fully dominated sales in the last quarter of the year, with slight competition of Mexico, while in the first quarter of the year the clear leader was Chile, although with greater participation from Mexico, which, by the way, extends until the summer, when it competes with domestic production.

Now, for any of the three countries mentioned, getting more space when U.S. domestic production is high, does not seem promising, because they would be at a disadvantage in terms of quality and freshness, so at first glance it seems that there is not much room to send blueberries during that period.

However, in the case of Peru, it could be reviewed how to obtain greater share at the beginning of the year, in January, February and March, which could be achieved with a smaller drop between December and January.

Of course, there would be direct competition with other countries, mainly with Peru, but considering the decrease in Chilean exports in recent years, everything indicates that there will be an interesting opportunity there, an opportunity that of course Mexico also wants to take advantage of.

Also, as harvest in the United States decreases in August and September, Peru could also try to get ahead to have larger volumes in those months, which is precisely the period that other countries take advantage of to have export, as is the case of Argentina, Colombia and Uruguay, being that during those months there is not strong competition with Chile and Mexico.

In short, during the last decade Peruvian blueberry industry has not only been able to position itself in the U.S. market, but also managed to reach the leadership of world exports, mainly due to its dominance in the late autumn and early winter period.

Additionally, it is also important to mention that the world blueberry industry will  be meeting on March 9th and 10th in Lima, Peru, for the XIX International Seminar Blueberries, where the opportunities for the future of this agricultural product will be analyzed.

All data presented were obtained from FAO-FAOSTAT, USDA-ERS and USDA-AMS.