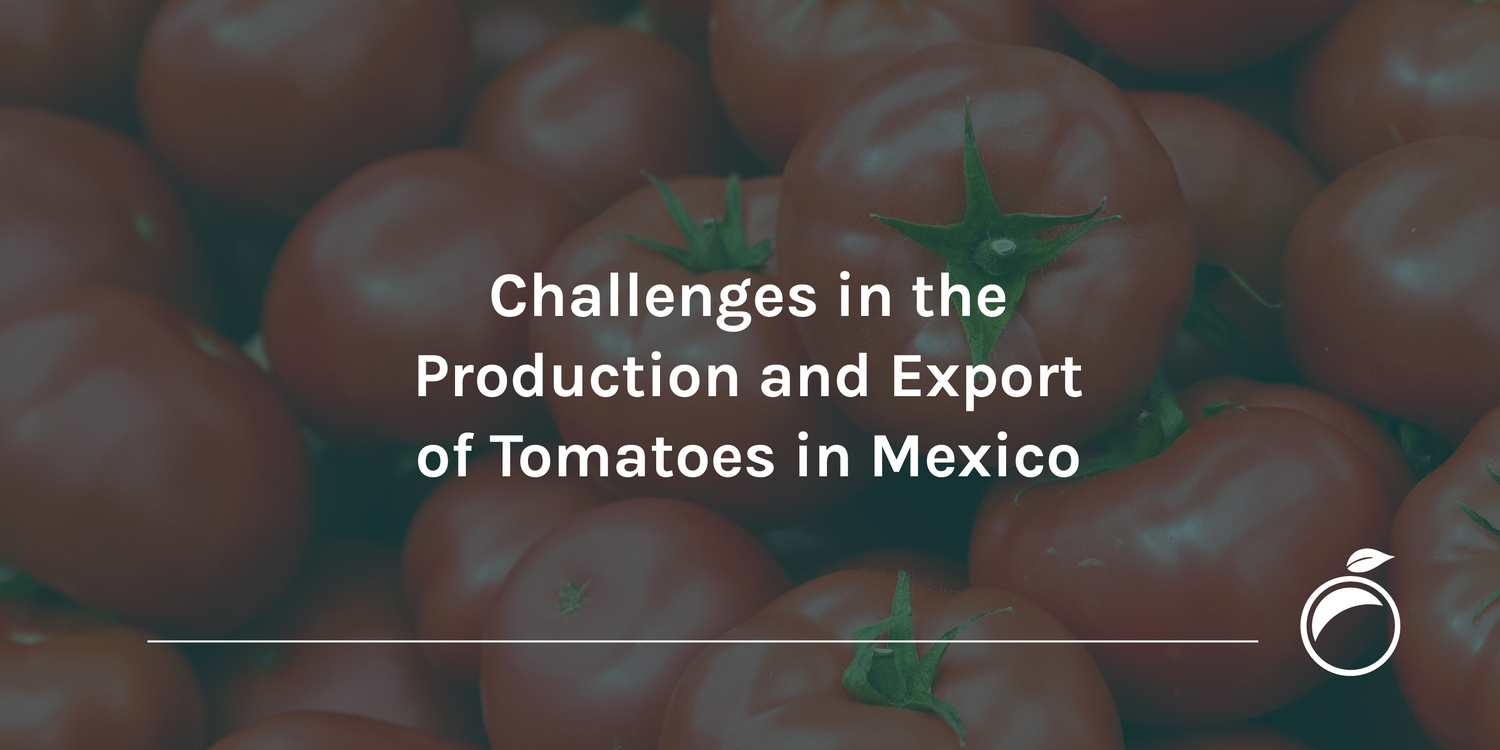 Challenges in the Production and Export of Tomatoes in Mexico

Tomatoes are one of Mexico’s most important crops; in economic terms, it ranks fourth in terms of the agri-food product exports that generate the most money for the country – at 1,980 million dollars – beaten only by beer, avocados and berries, according to the Panorama Agroalimentario 2020 publication by the Agricultural and Fisheries Information Service (SIAP).

The crop also requires a lot of labour throughout its production cycle, meaning it also has a major impact on a social level, creating sources of employment in the main productive regions of the country.

Nevertheless, the crop faces some interesting challenges for the future, which will need to be overcome for it to remain competitive on the market. With that said, we will analyse the 3 main challenges below, although these are by no means the only difficulties the market is facing.

Mexico has become the United States’ main supplier of Cherry and Roma tomatoes in late autumn, throughout the winter and in early spring, although many Mexican farmers can produce and export all year round thanks to greenhouse production. At some point, therefore, they compete directly with US farmers, who see their sales prices drop as a result of the quantity of Mexican tomatoes available on the market.

In fact, according to a study conducted by the University of Florida, if Mexican tomato imports increase by 50% over the next few years, farmers, mainly in Florida, may lose up to 27% of their annual income.

The trend observed over the last few decades will continue, since in 2020 around 590,000 tonnes were produced in the US, which is barely a third of what was produced in 2000, as the Mexican tomato is dominating the US market, with three times the market share of domestic production.

In fact, between 2009 and 2019, imports of Mexican tomatoes by the United States increased by 60%, which may be affecting farmers in Florida. However, there are of course other factors that have nothing to do with Mexican producers, such as the increased cost of land due to pressures from property development, lack of workers and the cost of labour, as well as the ongoing incidence of tropical storms and cyclones, which together have undermined the production capacity of Florida farmers.

Nevertheless, several industry specialists in the United States are already indicating that a 50% increase in Mexican tomato imports is unrealistic, although they also think that for national producers to continue being competitive, they must begin to invest in mechanisation and automation, as this is the only way in which the scenario can change.

In this respect, the challenge will be coping with the measures that the US Government wants to implement as a result of the pressure that will certainly continue to come from local farmers. Therefore, Mexican farmers will have to continue to strengthen their social and environmental responsibility, as well as maintain and raise their standards of quality, fulfil all certification requirements and above all, continue to produce at competitive prices.

Increasing the Use of Technology to Boost Yields

According to the SIAP year-end statistics for agriculture for 2020, tomato production in Mexico takes place as follows: 40.0% in greenhouses, 32.8% in open field, 26.4% with shade cloths and 0.8% in polytunnels; this data indicates that the use of technology for this crop is balanced between: production that is modernised, semi-modernised and that without the use of technology.

In fact, in Mexico the tomato is the crop that has driven the adoption of greenhouses as a tool for increasing production. However, with a third of production still in open-field farming, there is considerable market uncertainty, on top of the fact that the average national yield for greenhouse production is 5 times higher than that of open-field farming,
184.9 t/ha versus 37.3 t/ha, so there is plenty of room for improvement.

Fifty per cent of production is currently concentrated in the states of Sinaloa, San Luis Potosí, Michoacán, Zacatecas and Jalisco, where production is mainly through open field during autumn and winter, so plantations are at the mercy of an adverse winter season, which often leads to significant losses.

However, the states with greater average performance are Querétaro, Nuevo León, Coahuila and Puebla, all with an output of over 300 t/ha, mainly due to investments in protected agriculture that aim to export to markets where better selling prices may be achieved.

Increasing the use of technology to boost yields is important as a view to the future, as production per unit of land area will have to increase considerably in order to remain competitive; in addition, a greater surface area of protected land will allow the flow of exports throughout the year to increase.

The tomato is one of the agricultural products that exhibits most volatility annually, mainly due to the fact that open-field production is exposed to adverse weather conditions, although there are other factors that rapidly lead to rising and falling prices, which make tomato production highly risky.

This volatility creates an atmosphere of uncertainty for farmers who use open-field production, as there are no guarantees of return on investment, especially at the moment, with climate conditions and the availability of workers being so unpredictable.

However, when the weather is favourable for production, a surplus of product is produced, which pushes prices down, to the extent that it becomes more profitable for farmers to feed the tomatoes to livestock, or throw it straight out, as the market price does not cover the production costs.

This scenario plays out repeatedly, especially in Sinaloa, where it must be dealt with by modernisation, since production that is completely open field needs to start being protected in some way, to minimise uncertainty and avoid the prices of tomatoes suffering sudden changes nationally, which lead to both producers and consumers losing out.

It is precisely for these reasons that farmers who have the economic, administrative and technical resources to do so prefer to focus their production in exports, as they can achieve higher selling prices with a relatively safe market, leaving only the leftovers for the national market.

The prospects for the importation of Mexican tomatoes into the United States are positive, as in Mexico, the industry has been doing really well over the last few decades. However, the potential risks for production and exportation remain, so they will have to keep up the good work.