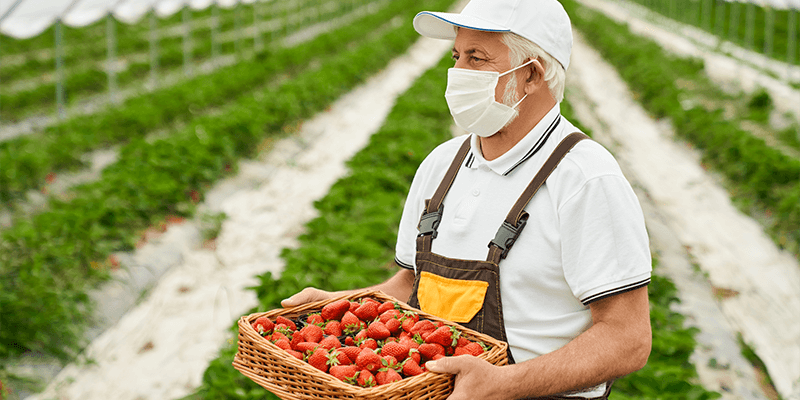 The U.S. government recently began to request agricultural laborers and fresh produce truck drivers to be vaccinated as a requirement to enter the country, otherwise the U.S. Customs and Border Protection will deny them entry, a measure that could lead to serious supply problems.

The measure was reported to the International Fresh Produce Association (IFPA) and came into force on January 22, 2022. To comply with it, those involved must be vaccinated with one of the vaccines approved by the Centers for Disease Control and Prevention (CDC).

Both day laborers and truckers are considered essential workers by the U.S. government, so they had been exempted from previous vaccination mandates. But this time they will finally have to comply with the requirement, although it is not known if there will be a tolerance period. It is important to mention that the measure applies to both Mexican and Canadian workers.

This establishment could generate problems for the supply of fresh produce to the U.S. market, although the magnitude of these problems is unknown due to the lack of official figures indicating the percentage of day laborers and carriers already vaccinated.

In addition, Mexican farmers and traders could see their export flows to the United States affected, as winter is the season in which a large amount of fresh agricultural products are shipped, this because of the adverse weather in much of the U.S. hinders or prevents agricultural production in its entirety, making Mexican shipments essential.

According to the latest figures, in 2020 Mexican produce accounted for 77% of total U.S. imports of fresh produce. Consequently if the population of workers crossing the border is not mostly vaccinated, then there will surely be disruptions in fresh produce shipments, which in turn will create shortages in U.S. retail stores.

California production could be affected

The government’s decision could also significantly affect the production of leafy vegetables in California, which is in its peak season, being the largest producer of this type of crop in the country; this is because many day laborers cross the border daily to work in the fields.

This could undoubtedly represent a sharp blow to production in an agricultural region constantly plagued by drought, especially considering that the rainy season in California started off quite well this year, so expectations of a good harvest were beginning to emerge among farmers.

The solution lies in the industry itself

It is difficult to estimate what could be the scope of this vaccination mandate for the fresh food sector, in both Mexico and the United States, but taking into account that the U.S. government considers as vaccinated a person who has completed two weeks after the application. Then, we could talk about two months of great impact, although it is also necessary to see what is the population already vaccinated.

Of course, the agricultural industry will have to push for vaccination to be carried out as soon as possible, so that interruptions to agrifood chains are as few as possible. It also remains to be seen if there is pressure for a tolerance period, although this seems to be much less likely.

In addition, we will have to wait and see what the reaction of the Mexican government and industry will be, through the authorities and representatives of the agricultural sector, which means that there is uncertainty.